Serie Imperiale is the title that the artist Flavio Favelli gave his first work for Valsamoggia, territory where he chose to live and work now for twenty years when he moved to Savigno.
A work that consists of three stages of realization (painting, tear, clogging), and investigates more themes, without exempting from a debate on contemporary art.

Serie Imperiale is the name of a series of stamps of different values ​​issued in 1929 and in use until 1946, on which the face of Vittorio Emanuele III is represented. Of this, the two stamps chosen as the subject of the work have undergone an “overprint”: a stamp has been affixed which, altering the appearance of the sovereign, served to decree a different state of belonging to the stamp. In particular, the Italian Social Republic and the German occupation of the territory of Zadar after the armistice of 8 September 1943.

With Serie Imperiale, Flavio Favelli, born in ’67, brings out a precise period of Italy, a chapter of problematic history for the country. At the same time the work has a strongly biographical origin and embodies the artistic practice through which Favelli realizes assemblages, collages, sculptures and environments starting from documents and fragments of daily use (from stamps to other simple objects, furnishings, wrappings, furnishings , insignia), which recovers or purchases systematically as part of a memory, to reconfigure them in poetic images.

In line with his current research on murals, the double site specific intervention of Serie Imperiale, at the former Casa del Popolo and the former miniCoop in Bazzano, presents a painting on the wall in the interior that is in close relationship with two contexts loaded with images and history. Part of a single architectural complex, the two places contain in that “ex” a state of passage that speaks of a transformation in progress not only structural, but cultural and social, and a territory in which political commitment, cooperative enterprise and social relations are called to question themselves about their present and future.

The painting phase will follow that of the tear (by the Camillo Tarozzi restoration workshop) through which the two murals, on display until June 3 in their specific context, will be transferred to canvas, made “furniture” and “noble” once acquired the investiture of “framework”, indeed, of real “diptych”.

Finally, once the obstructions have been removed, Favelli will complete the work with a simple gesture of plastering and patching, leaving a trace of the process that has taken place, consecrating the two walls with the artistic act.

The filling coincides with the origin of the artistic act. Taking care of those two holes in two places considered “squalid”, emphasizes the fact that the artist has a different point of view, sees the beauty where usually the costume of his time does not see it because it is a beauty that passes for thought and therefore different. (FF)

The work Serie Imperiale will be documented through an immersive photograph (edited by DeyeVR) that, reproducing it in virtual reality in the original locations will become an integral part, preserving the experience forever.
Finally, a publication will be published to document the entire project.

Flavio Favelli lives and works in Savigno (Bologna). After graduating in Oriental History at the University of Bologna, he took part in the Link Project (1995-2001). He has exhibited with personal projects at the MAXXI in Rome, at the Centro per l’Arte Pecci in Prato, at the Fondazione Sandretto in Turin, at the Maison Rouge in Paris and at the 176 Projectspace in London. He participates in the “Italics” exhibition at Palazzo Grassi in 2008 and at two Venice Biennials: the 50th (“Clandestini”, curated by F. Bonami) and the 55th (Italian Pavilion curated by B. Pietromarchi). In 2015 the work The Angels of Heroes is chosen by the Quirinale to commemorate the fallen soldiers on the anniversary of November 4.
www.flaviofavelli.com

“Serie Imperiale” is a work by Flavio Favelli for Valsamoggia, curated by Elisa Del Prete and Silvia Litardi, promoted by the cultural association Nosadella.due on public commission of the Rocca dei Bentivoglio Foundation (Valsamoggia, Bologna), winner of the second edition of Italian Council 2017, conceived by the Directorate General for Contemporary Art and Architecture and Urban Peripheries (DGAAP) – Ministry of Cultural Heritage and Activities and Tourism. 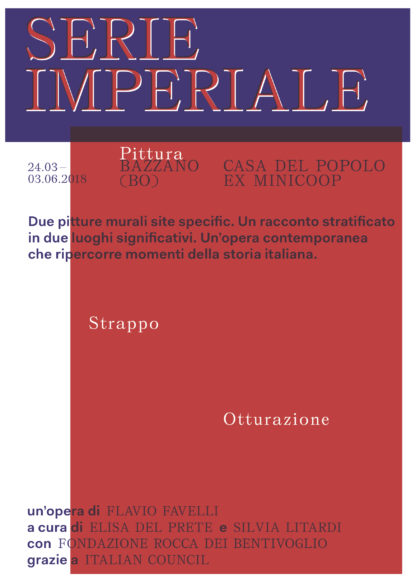 “Serie Imperiale”
is held thanks to the support of
Italian Council